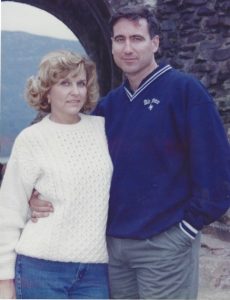 Patricia grew up in the suburbs of Los Angeles and was a California girl her whole life, though she choose a career in the Air Force and took off to see the world.  She was a pioneer for women in the Air Force, joining as a Woman’s Auxiliary Air Force (WAAF) before transitioning to the Air Force.  She was a base commander in California and Chief of Personnel for US Space Command, retiring as a Colonel.  But despite her military accomplishments, she was most proud of raising two wonderful sons, Ted and Jon, as a single parent.  She could command a room when making an entrance.  When I first saw her in the summer of 1996, I could only say  “Wow!”.  We met shortly after and fell madly in love.  We only had seven years together, the last four in marriage, before she succumbed to breast cancer.  We can only wonder what else she could have accomplished?

I miss her laugh and outgoing personality every day and try to honor her memory by service to others – something she valued. 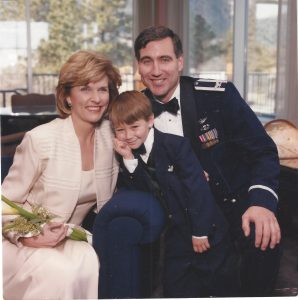 I have since remarried to another widowed person, Nancy Saltzman, and I am grateful to find love again.  We honor our former spouses while we build a life together.  We support the Soaring Spirits Resilience Center, Soaring Spirits and Camp Widow because we know what it is like to walk that journey.  We want to give our time and resources so that all widowed people know that they are not alone, to tell the stories of their loved ones, and have the resiliency to move forward to the next chapter of their lives.