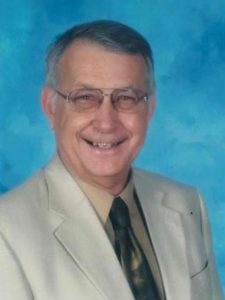 Vern West was born in Castalia, Ohio and was an avid Ohio State Buckeye fan. He moved to southern Michigan after graduating from Defiance College to begin his teaching and coaching career. Five years later he married Dianne and their son, Jeremy, joined them seven years later. They moved to southern Nevada in 1982 where Vern continued to teach and also began a career as usher supervisor at the Thomas & Mack Center, UNLV’s sports/entertainment center. He retired from both of those positions in 2003 to open the Orleans Arena as Guest Services Manager. Cancer arrived three years later and he valiantly battled multiple myeloma for over four years. Vern was an amazing teacher, a fabulous coach, and an inspiring mentor to many.

Dianne and Jeremy are grateful to be able to honor Vern as one of the Founding Donors of the Soaring Spirits Resilience Center. Widowed Village and Camp Widow provided the support Dianne needed during her first year of loss and both she and Jeremy are proud to support Soaring Spirits International as Members and donate many volunteer hours each year.